It has taken me a while to process this race, let alone finish this post and RR....

For all my training, discipline, early morning training sessions, training races, ambitions, and sacrifices, I am humbled.

The 2014 iteration of the BMO Vancouver Marathon is the same course that has been since 2012. Three years of running the same course. And although my fitness is better than 3 years ago (stronger), my mental stubbornness more acutely refined (tougher), my speed improved (quicker), my experience more...er...deeper(!?) (wiser), this marathon punched my ticket.

In fact, no matter my hopes for a strong finish, consistent pace, and conserving my energy, I was again struck on this very taxing, very difficult course with giving up my time goals when the writing was on the wall. Just after I hit "the wall".

I have been a bit of a whiner with this one. Both pre and post race. Approaching these two weekends, the Sun Run and Marathon respectively, I posed a question to myself:

Race morning had me putting on my usual routine, 6 AM wake-up, out the door by 7, on Canada line by 7:30, at the race start by 8:00 am. Not many other souls were on Georgia Street by that time, but it filled up quickly. I met up with Hans Zimmerling, and we did a warm-up with some strides. A full cast of characters made it out to this one: Chris Barth, Tim Abercrombie, Ryan Hayden and his group from our corporate team were all at the start in the elite corral. Finishing my warm-up, the goal was to turn out 3:30/km's for the duration, putting me in for 35 minutes. I thought that to be a lofty goal, but hey, I set lofty goals.

The gun went off and it only took a second or two to get over the start line. Hans, Tim, and me ran down Georgia Street into Denman. We stayed fairly close together through 3k. KM 3 to KM 5 started to wear on me and I could tell that my pace was dipping every so slightly on the false flats. In fact, I do not really remember much from those two kilometres. Hans started to pull away from me here, and I let him go. I slowly climbed Beach Avenue up to the Burrard Bridge, passed by a spectating Alex Lea, and began climbing the Bridge. On the downward slope, my buddy Darbara caught up to me. We ran together from 6 to 8.5 when he slowly began to distance me slightly.

I went into a pretty dark place between 8k and 9k. The Sun Run, or any 10k, is a very short, very intense effort that is almost over before you know. Having said that, there is enough time for a runner to question why they are doing what they are doing. That happened for me in a short distance near the end of the race.

In fact, the Cambie Bridge, albeit uphill then with a nice run out into the finish, was a welcomed sight that snapped me out of my "Luke Skywalker in the cave on Dagobah" funk. I managed to get some time back on Darbara and close the gap to 8 seconds. Hans finished a full 24 seconds in front of me, with Tim "the Terminator" Abercrombie coming in at 35:04! And he is not a runner, he is a cyclist! And years ago, a triathlete! So I guess he is a former runner. He has an engine, a big engine at that! Chris Barth came in at 34:

It has been a long time since I did a Sun Run. I think the last one I did was in 2005 or so, in 45:22. Good enough to be the 1614 finisher across the line. Coming back to the Sun Run this year I had some high expectations for myself. As with any race, I tend to try and shoot for a PB. This race was no different--I jogged out 36:54 bettering my PB from last year's Sandcastle 10k by 22 seconds. Good enough to get across the line in 134th place. I missed my goal mark by over a minute, but that is for next time. I know how 35 minutes will feel, and know what I need to get there. Chris Barth told me back in the autumn to focus on the shorter speedier races, and it seems to be paying off! 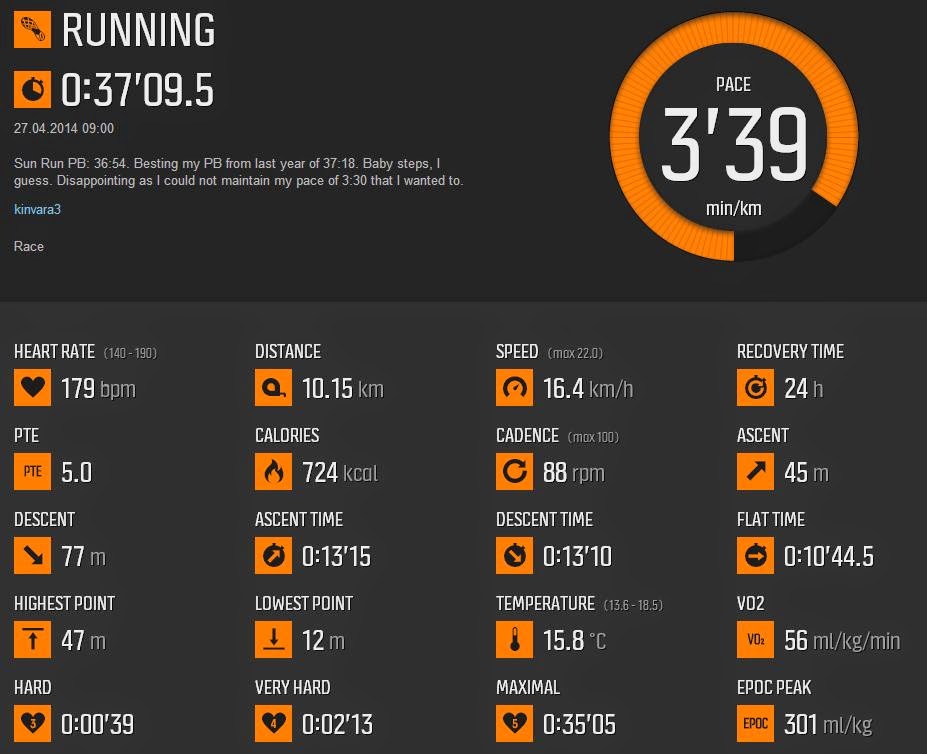 This one was a very fast 10k race that almost does not justify the race entry fee for the time I am out there, but the competition, festivities and roads to run on were awesome! I will definitely be returning to the Sun Run next year. This is a very smoothly oiled monster-machine to be able to support 45,000 finisher.