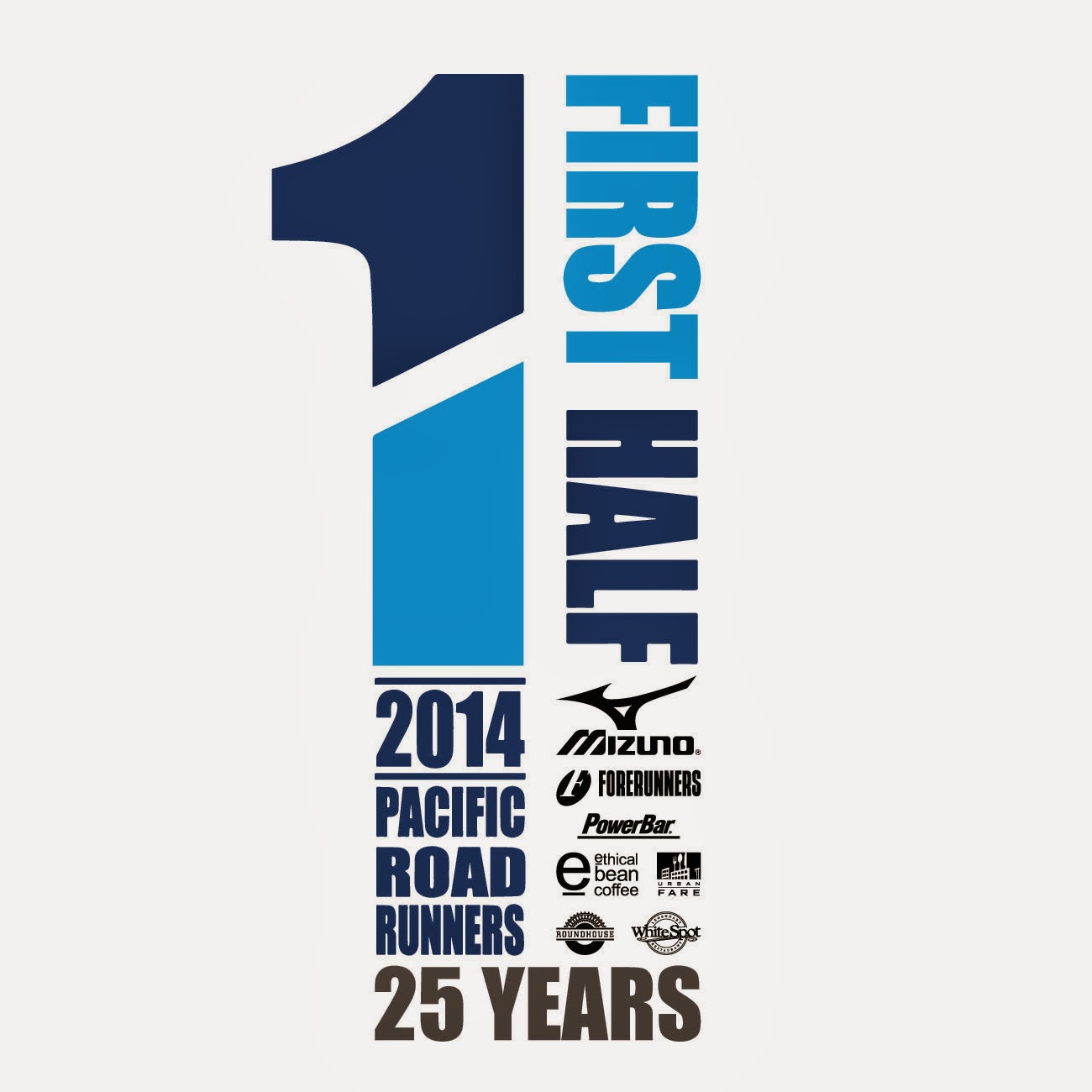 After a month of XC trail racing, the big test went down on Valentine's weekend: Pacific Road Runner's First Half Half Marathon. My first running in this race was 10 years ago. From the 16th annual to the 25th annual, much has changed for me, but little has changed with this event. Once again, the organisation, the post race food, the course, the scenery, all of is is top notch. The race remains a flat, fast course that brings out Vancouver's best runners in February.

Over those ten years, I have transformed myself into somewhat of a runner--my times on this course have gotten faster, expectations have gotten higher, and my love for a race that once was one of the most scenic races showcasing some of the best Vancouver has to offer has become something that resembles strictly business. The goal of PB'ing every time at the First Half has become the annual objective. See my report from 2012.

This year is no different from any other, save for the fact that I had the audacious belief that I could run the race sub 1:20. Aim high, right? I set this goal after last year's 1:24:31 finish, and over the course of 2013 and the beginning of 2014, I changed things up to train hard enough to make that new finish goal happen.


Sunday was a great day--no rain, but windy, and even the sun made an (obnoxious) appearance for part of the run (note: I wish I had some sunglasses for the final few miles). Darren Walton and myself made our way down to Yaletown together, talking plans and strategy for this race. We were there early--7am to be exact--and took our time getting our race packages, changed, warmed up, and ready to go.

I managed to start close to the front, running with Brian Dickson and put down a couple of 3:30 opening Km's.

Spencer Bass overtook me about 3k in, and I ended up chasing him for much of the race. 19 minutes and change through 5k; going into Stanley park I had the joy of cheers of support from Alex Lea who was volunteering for the race this year. Thanks Alex!! 39:48 through 10k--this was looking good if I could crank out a fast second half, then I would be on pace for a great race.

At the half, I had managed to hammer out 42:06 through 10.55k. The second half of the race was going to need to be faster. Spencer and I traded blows from the halfway point on. It was good--very little talk as we tried to stay focused.

In fact, contrary to past years I did not stop for any water or aid at all in this race--a first for me ever at the First Half. No slowing down, no consuming anything at all. As the wind hit the race in the face coming around Siwash Rock, the pace slowed just a smidge. Enough to make cranking up the run harder in the last 3 miles. And I did suffer in the wind. Not suffer like "My legs stopped working and I need to walk this sucks" but more of  "Why can't I run fast? Oh well" kind of suffer. With my race plan in the dumper, I tried to salvage something out of the last 3 miles. 5k at a 4 minute pace? "Yep" I told myself. I can do that.

19 seconds slower than last year. Virtually the same performance, without the killing myself to get there


Way off of my dream, second, and last ditch goals.

My second fastest half marathon.

Is this really disappointing? I was sick a week ago, had a presentation and paper to write for SFU HEAL M.Ed this week, got little sleep over the last 5 days, drank 1 beer for the whole week on Valentine's Day, and focused a tonne of my energy into this race.

There. Those are the excuses. Or reasons, if that makes me feel better. But really, for this race, I just did not have what I needed for the day. I did not push when I had to. I did not punish myself. I think that is how I did not meet my time goals.

One thing is for certain, even not finishing up with a PB, or meeting my time goal, I worked pretty hard out there. Hard enough for an afternoon nap. Also, I felt really good on this run. Although I could not crank it up, I could maintain. I did the run feeling more or less pretty even--not exerting myself too badly, but staying steady. That is a pretty good indication of where I am at right now.

Two weeks ago I believed that I would run out of my skin. For the race I ran within my means.

And I am not all that broken up about it. I had planned to be fast. All told, to run tempo for 21k is good, just not where I wanted to be. This was supposed to be the A-race. Instead, I turned out my second best time. Not every race is going to be a dynamite stick. I am pretty happy with this time, despite the wind.

There is always another race next weekend, and another First Half next year!

Congratulations go to a number of people that ran the race:

Spencer Bass--for pushing me pretty good through the race--you are a beast. Great run, great battle. That made my race!

Darren Walton--great talks and time spent for the day. I enjoyed geeking out with you over all things running and biking.

Brian Dickson--great run man! Looking forward to running with you in the near future.

Chris Barth--A 1:14!! Are you kidding me. Watch out for this Chris kid. He is gonna be something when he is older.

Tamara McKay--We missed each other, but Craig and Will look great! I hope you had a great run out there on a gorgeous day. 2 minutes faster than your goal time!! Great news!

Solana Klassen--I missed you as well out there. Don't give up on road racing--we all know the trails are better, but a road race still has its place!

Dale Tiessen for knowing when to pull the pin. Saving yourself from yourself can be a blessing in disguise. There are more of these things every weekend! 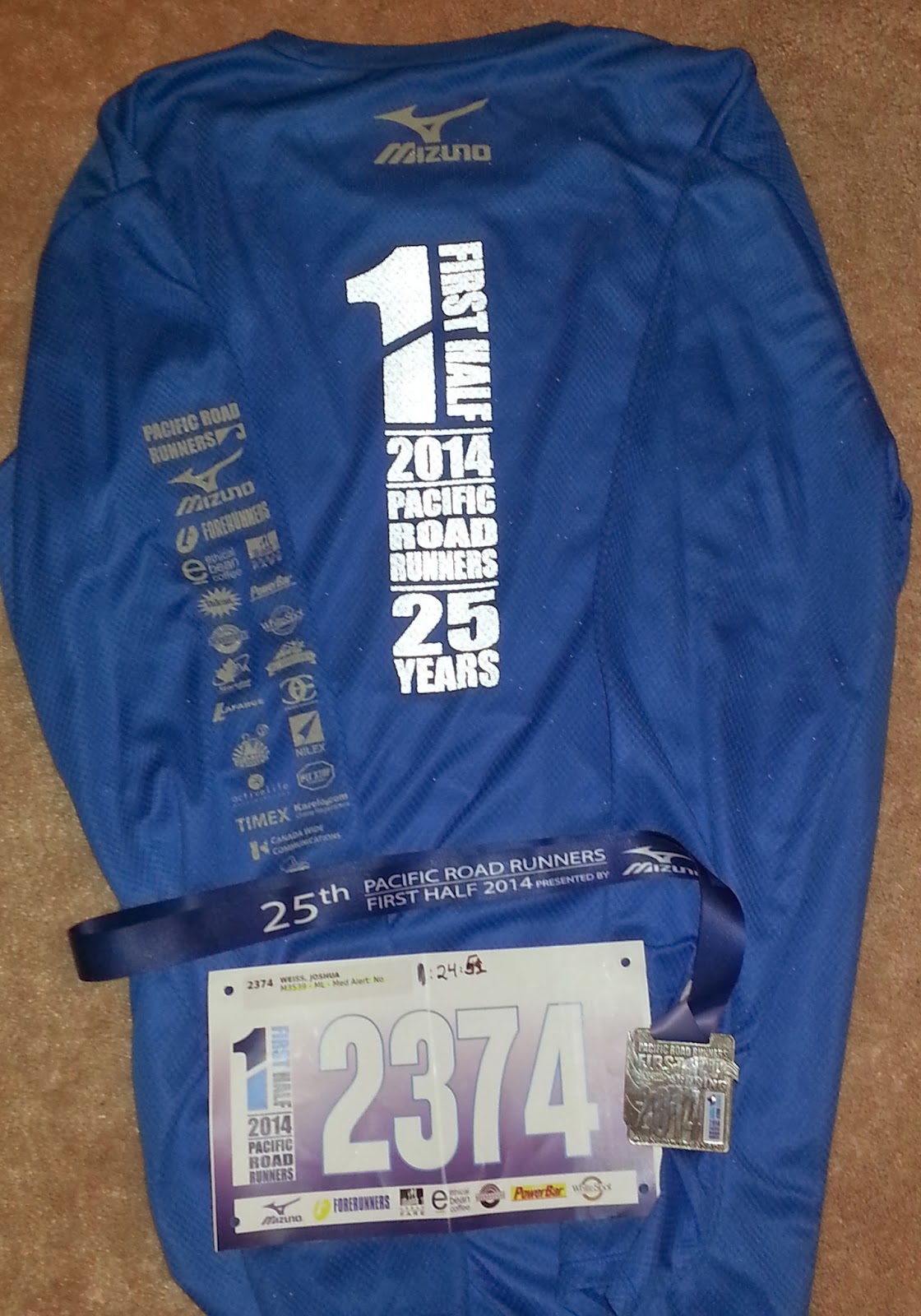 3 things I did well:

3 things to improve on:
The 25th Annual First Half Half Marathon presented by the Pacific Road Runners was another success--the top notch food, shirts, course, weather, and volunteers made for yet again another great event put on by this small group of 80 members. Thank you so much for this, my 9th First Half. Every year gets a little bit better. This year was by far the easiest half marathon I have ever done, easiest being a relative term. I suppose I need to run a bit harder next year. Two days on, I feel great--no DOMs, nor am I hunched over all stiffened up. 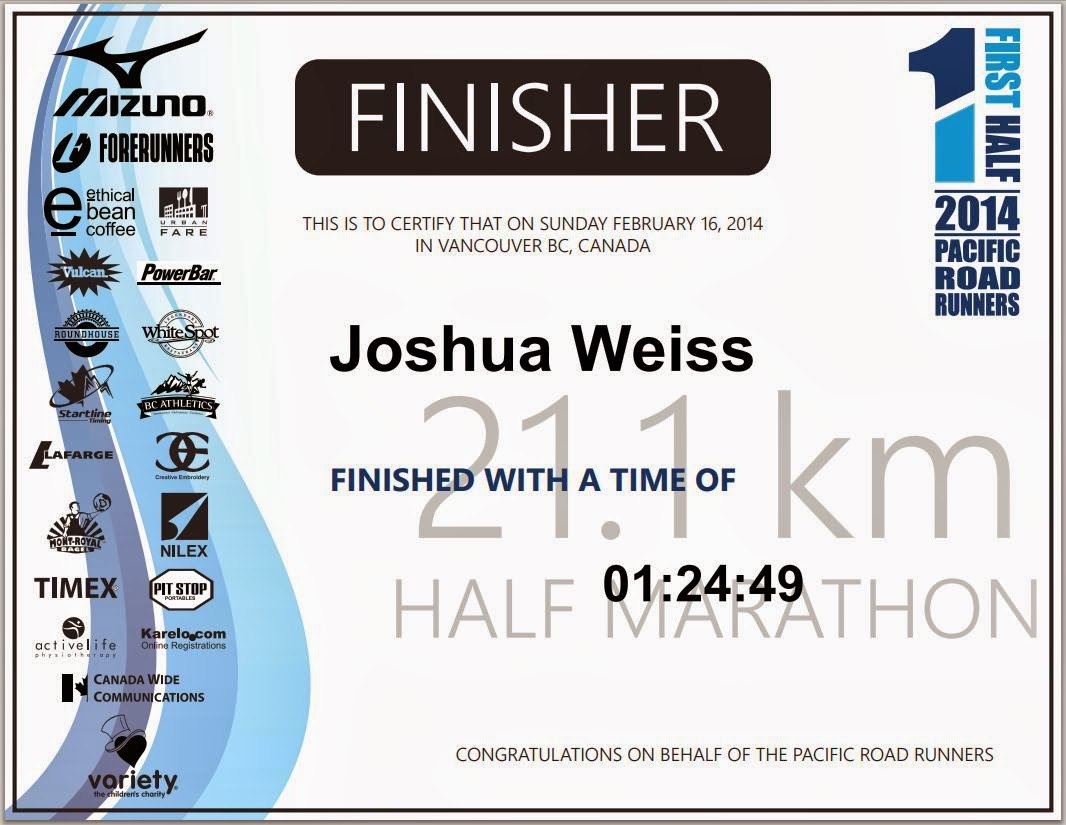 My All time results for the first half are here.

Email ThisBlogThis!Share to TwitterShare to FacebookShare to Pinterest
Labels: 2014 first half half marathon, First Half Half Marathon, Half Marathon, Joshua Weiss, Pacific Road Runners, prr first half, watershed athlete