This week has been rough. Not only am I tired from the races on the Sunday, I am spent from a couple of runs and a bootcamp that has taken it out of me up until Friday. Pooped out.

It has also been rough because of the beating I have taken on Strava. Because I do not have a license, I raced citizen class. I will buy one for the upcoming CX season, but because I am focusing on so much unning this year, I have decided to wait for the cut rate of $90 for CX. Anyway, back to Strava--I have had trouble justifying this to my cycing buddies, who have called me out after winning sandbagging the citizen class.

I suppose I routinely perform at a lower level during my practice rides, and crank it up on raceday, putting together sum of all parts of training. Don't we all do that? Push ourselves to the limit? Rarely do I leave it all out there on training rides/runs. My movescount results show that my 5.0 TE days are some of the hardest sessions that I do, and those are usually events/ races.

Running the fastest 10k race I have ever run before, then doing the Junk Yard Dog Race was something that I thought may be a bit of a handicap for me. The tone at the beginning of the week changed from one of support to one of...well, you will see. Which I think is pretty funny. My legs did not think the MTB race was funny, as a lap and a half in, they began to pack up/cramp up. I suffered through the last half of the race, preventing my heel from extending past a 90 degree bend so that I would not point my toe, or drop my heel down and suffer more cramps.

On to the race report. I will keep it short.


Finishing the Sandcastle 10k, I got changed into my Daryl Evans-Sugoi kit at the car and bombed up Oxford to the bike park (by car mind you. I did not bike up Oxford. I did do that last week) in order to get ready for my race at 11 am. As it turned out, the race start needed to be pushed back to 11:15, which was fine by me. I polished off three bottles, a package of Clif Shot bloks, and two gels, along with another dose of Sportlegs for the MTB race. My warmup was low key, as I soft pedaled around the athletic park, rode some of the course and the pavement, anticipating the toll my body would be going through in the coming moments.

The start was quick leading to a bottleneck at the first singletrack-mound climb. Riders were everywhere, stopped, walking their bikes up the short hill, remounting and bombing down the rock wall. The first lap I was caught behind traffic. One of the DE crew's newest members, Jake, was leading me out through the singletrack. On the first double log crossing, Jake went over the bars. I went around him and never looked back, passing many riders, and not getting passed for the rest of the race. One and a half laps in, as I mentioned, my legs packed up. For the last half of the race, I tried to remember what Aaron told me--"slow is smooth, and smooth is fast. It made sense to me at the time. The 29er made things smooth. I thought I would have trouble on the big wheeled bike, but it was a dream to ride, if not a bit heavy to lug around. Taking out the tubes will make for a lighter bike. It was pretty cool to have the kids and Lor there cheering us on.

Other than that, it was a fairly quick ride through the bike park with two races down in one day. No Test of Metal for me this year as it falls on the day of a birthday party. The next 3 years are open for the TOM, and I will most likely make the trip up each June.

Doing the double raceday: Run, then bike. Part I.

Yesterday I attempted something that I have only tired once before, and that was to run a race, then do a bike race on the same day. In 09, I travelled to Fairhaven to do the Chuckanut Footrace, which was my first. I finished that and came back home for the afternoon to ride the Tour de Delta Cat 3/4 crit. On that day, my run was good--a hard run that I had. prepared for poorly the night before by attending a summer part at one of my colleagues. My crit? A horrible disaster. I was dehydrated from the hot day, the night before, and the intesity of the crit trying to maintain 47km/h on the streets of Ladner. I lasted all of 16 minutes of a 30min + 1 Lap crit. Legs all packed up, I could not hold the pace, and subsequently dropped out of the race. Perhaps I had bitten off more than I could chew.

Sunday was different. I attended the Sandcastle City Classic in White Rock--a beautiful run through Ocean Park and down Marine Drive to the beach. Easy, this course is not. Although it is a net elevation loss, the rolling hills and climbs make this thing quite a challenge. This was my 3rd attempt at it since 2010.

In 2010, my goal was a sub 40 minute 10km, which I managed with a 39:36. Pleased as punch, I came back last year hoping to break 39 minutes. I clocked in at 39:24. A slight improvement over the first year, but I was disappointed that I could not muster something greater. After the end of last year's race, I was shattered, and Physiomoves provided me with a post race massage. That actually hurt.

Yesterday I went in with the mindset of trying to set an unrealistic goal for myself, and run my tail off to catch it. I thought 37 minutes would be tough, but was willing to try and run that fast to make a huge leap forward on my PB 10k.

The race began just up the road from Crescent Park Elementary School, and sees us run through the neighbourhood up an around to 132nd, down 132 to 18th ave, east on 18th to 128th street, through ocean park to Marine Drive, and down the drive to west beach, the finish being at the bottom of the hill. As I stated, this race is a killer due to the climbs, but also to the quad pounding descents on pavement. 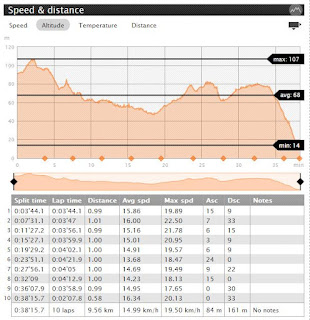 I started the race hitting a 3:05/km pace, and cooled it down before I made it to the 2km mark, running 7 minutes for the first 2kms. It is hear that I feel that I can bank some time on this course. With a 10km, the race is too short to try and pick up time at the end, and this course seems to suit some time banking due to the downhills. I ran with Kristin Smart, a runner I ran with in the marathon a month ago. I know her to be fast, tough, and determined. I thought she might drop me, but we managed to pace each other fairly well through the first few kms. 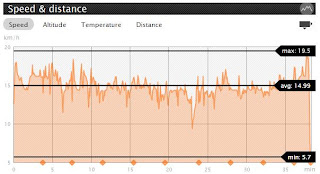 Just after 4km, the course lead us onto Ocean Park Drive, and straight into a headwind. This is a long false flat section that seems to go on for longer than the 2km that it does, and pitches up near the end as it approaches 14a ave. This section was fast, but tough. The sun began to shoot through the clouds, and I bypassed the water station just after 5kms in order to conserve time. Again, a 10km is too short to waste time drinking.

At 6km, 14a is a beast of a hill--not the steepest, or hardest, but it is at the point in the race where going hard to earn a solid time begins to get difficult. Staying on the gas is necessary here to the top of the hill. Actually, between 5kms and 8 kms the race is at its hardest, as Marine Drive rolls along--climb and descend into a long climbing false flat before the near 2km descent to the beach.

Things were shaping up well for me, as I felt on the edge but not in too much trouble as I tapped out an average 3:49 pace. Unless I'm doing speedwork or Yasso's, I really do not hit speeds this fast for extended periods of time. But after all, this is a race. And PB's don't come without work. And the taste of blood in your mouth from your lungs. (*That last one did not actually happen at this race) 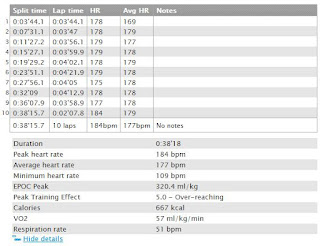 I felt good coming up 6km, and through the next two, I did everything I could to minimize my losses. My footpod  had me on pace for a 40 minute 10k, as I only looked at the average pace on my watch and crossed it with the running time of the race. I did not remember that my footpod was out a couple of hundred meters, so it indicated that I was running slower than I actually was. By 8km, I was telling myself that the end was near, and I could pick up some of the time I lost on the hills and rollers.

The downhill was long. Just when I needed my legs to open up and go fast, they would hit their limit. Forcing
myself to run faster, I crossed the 9km marker with a head of steam. It is necessary to run loose on the downhill to absorb a much of the shock as one can. Otherwise, the next few days are going to be really stiff.

As I approached the finish, the running clock came into view. I spotted 37:** on it, but could not make out the seconds. Just before the line, the clock turned over to 38:00, and I smiled, missing that minute milestone by 4 seconds. 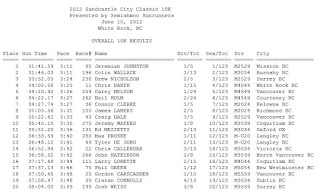 An improvement over last years 39:24. I am really happy with this result.

Kristin came in at 38:07. I congratulated her on a good run. She told me she was hoping to 2 minutes faster.

Kristin was great--she is a very motivating competitor and she handily won the women's division of this race with her time. A 2:49 marathoner, a 1:22 half marathoner, and a 37 minute 10k runner, she is quite accomplished as a distance runner. She bested me by 8 minutes at the BMO Run Van Marathon this year. Very speedy, she is.

Running with her has upped my motivation and changed my perspective on what my abilities are as a runner. I feel that with the training I have put in this year, I can post the times that she has achieved. My goal for my next half will be to get in the 1:23s. I think cutting 4 minutes off of this year's 1:27 at the first half is doable. That will be an achievable goal. For 10kms, I am content with this result for now, but feel that perhaps on a less hilly course, I would be down in the 37 minute range.

The next big one is the Kamloops Marathon. This is an encouraging result leading to that race in about 8 weeks. I am looking for my best marathon result there, in the heat. We shall see what goes down.

As for the double, I headed up to the South Surrey bike park immediately after the race to do the Junk Yard Dog on my 29er XC bike. Race report #2 for the day will follow soon.....